Mystery Photo: An Easy One 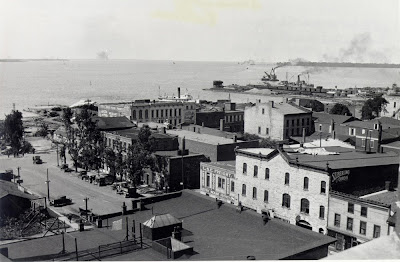 It's been too busy here to post much lately, so I thought I'd do a quick "Mystery Photo." It probably won't be very difficult for most people, but I thought the view is interesting -- significantly different than it looks now.

Update: It looks like the secret is out. If you haven't seen Jason Werling's blog on the Sandusky Register website yet, go take a look at his "before and after" picture, taken from the top floor of the Feick Building.
It looks like we had a "ringer" in the comments. The photo above was taken from the Feick building in 1923. The large stone builing on Water Street was a winery, but it was probably the Engels & Krudwig Winery; the Dorn Winery was a block further east.
Posted by Sandusky Library Archives Research Center at 3:25 PM

Not sure where, but looks like a war ship in the background. So I would say around 1940's.

Photo taken from the Feick Building (on Market between Colunbus Ave and Wayne St. looking Northeast across Wayne St. I think hotel on southeast corner of Wayne and Water St is where Chas. Dickens stayed on his visit to town. The Porterhouse Hotel was its name, I think. Age of photo? Around 1923. Is the tall stone building on Water St, the Dorn winery?

It is fun to see another Archives using the "Mystery Photo" concept in a slightly different way! This is a great blog -- keep up the good work!

Top Photo, If standing at the waters edge looking up towards where Citizens bank is now.
Notice the post clock on the left side of the picture? That clock was there up until the early 1970's. Today Citizens bank erected a simular post clock across from the Bank in their parking lot. After Sears moved out, that building became home to the Y.M.C.A. Year of Photo? I'm guessing 1928.

Addition to the top Photo, The Y.M.C.A. was only in the Sears building for an extremely short time. The Y then moved up two blocks from that old Sears building, into a much larger building.

Not from the Feick Building because Market St can't be see below. More likely on top of the Herb & Meyer building prior to the fire. Good shot of a steam dredger working the dock channel. Looks like the Steamer Lakeside/Olcott center. The steamer at the B& O dock is not a warship, by the booms and boxcars I would say a package freighter. The cars on Wayne appear to be mid 1920's vintage.

Seems to me that the Porterhouse steak got its name from an article by Charles Dickens commenting on the cut of steak served in the Porterhouse Hotel. I remember when it became the Zanzibar Nite Club. Used to get my haircut in the basement of this building by Hank the barber back in the 50's