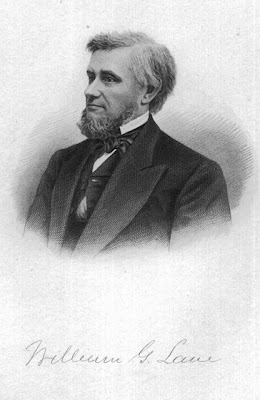 William Griswold Lane was born in Norwalk, Ohio in 1824 to Ebenezer Lane and Frances Griswold. When William was twelve years old he became acquainted with fellow student Rutherford B. Hayes, at the Maple Grove Academy, in Middletown, Connecticut. They became lifelong friends. William Lane attended college at Yale and Harvard, and spent a year studying law in Berlin, Germany.

After returning to the United States, William practiced law with his father. In 1850, William married Elizabeth Diodate Griswold. In February 1873 William G. Lane was appointed Judge of Common Pleas for the Fourth Judicial District.

William G. Lane died in October 1877, at the age of 52. Resolutions from the Court and Bar of Erie County appeared in the Sandusky Register. One resolution stated “In this death, the bench and bar have lost an able, impartial and upright Judge – one of the most esteemed, high minded and scholarly members of the profession – and this community a citizen of great mental and moral worth – a man just, honorable and honest in all his dealings with his fellow men and conscientious and faithful in the discharge of all the public and private duties that devolved upon him. While we mourn his loss we delight to honor his memory.”

The Lane family monument at Oakland Cemetery is a beautiful sculpture in honor of William Griswold Lane and his family. I.F. Mack wrote in an article in the June 1882 Firelands Pioneer, that Judge William G. Lane was “without doubt, the wisest counsellor we ever had at our bar.” A memorial tribute to Judge William G. Lane is on file at the library at the Rutherford B. Hayes Presidential Center in Fremont, Ohio.

A view below of the Lane Family monument at Oakland Cemetery in Sandusky, Ohio. Several family members’ names are inscribed on the stone. 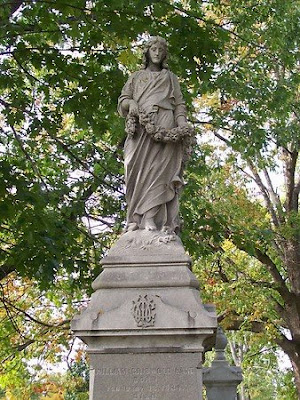 Courtesy of the RFL Librarians said...

Thanks for your kind comments regarding "The Book Stops Here." Your blog is terrific! It gives us some good ideas for programming.

Thank you for commenting on my blog. I do love history and have visited a number of states near Ontario. Much of our history is shared.

WHEN SHS WAS DOWNTOWN, ADAMS ST. STUDENTS WERE PERMITTED TO LEAVE THE BUILDING FOR LUNCH. MY GIRL FRIENDS AND I WOULD GO TO NEISNERS EVERYDAY. I WOULD ALWAYS ORDER THE SAME THING. GRILLED CHEESSE, F.F. AND A CHERRY COKE. WISH I COULD REMEMBER WHAT IT COST. I ALSO REMEMBER GETTING THE DOUNUTS FROM WOOLWORTH'S. CHOC. WHITE AND PINK FROSTING. THEY WERE STILL WARM.

YOUR BLOG WAS SO ENJOYABLE. KEEP UP THE GOOD WORK.