Annette Fitch Brewer was born in Ashtabula, Ohio in 1870 to a pioneer Ashtabula County family. She was widely known as an author and historian and was considered an authority on the early history of the Western Reserve. In the late 1930’s Annette broadcast historical radio programs on Radio Station WICA. She was a founding member of the Martha Pitkin Chapter of the Daughters of the American Revolution, and the Society of Mayflower Descendants in the State of Washington. Later she was active in the Mary Stanley Chapter of the D.A.R. in Ashtabula.

After graduating from Lake Erie Seminary in 1890, Annette Fitch was active in the women’s suffrage movement. In 1893 Annette Fitch married I. C. Brewer, a prosperous Sandusky business man. In April 1903, Annette Fitch Brewer played “Mrs. Josephine Dulaney” in the local production of the play “The New Dominion.” The play was given at the Nielsen Theater, and received favorable reviews in the local newspaper. Cast members included local photographer W. A. Bishop, as well as. A.J. Peters, J.W. Andrews, E.L. Marsh, G.E. Wilder, Leontine Woolsey and Adah C. Kunz. Annette is pictured below with W. A. Bishop. (A set of photographs of the entire cast of “The New Dominion” is held by the Archives Research Center of the Sandusky Library.) 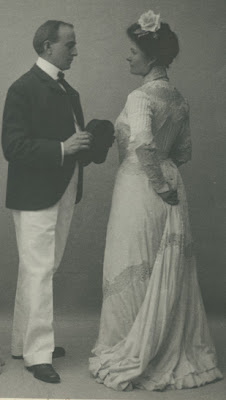 In 1905, following her divorce from I. C. Brewer, Annette Fitch Brewer fled Sandusky with her young son, I. C. Brewer, Jr. They went to Canada and the western United States using aliases to avoid being found by Mr. Brewer. Annette wrote a book entitled The Story of a Mother-Love chronicling her adventures. Newspaper editor I. F. Mack carried a serialized version of Annette’s book in the Sandusky Register. In April of 1910, Annette Fitch Brewer and her son were located in Washington, under assumed names. I.C. Brewer, Jr. was returned to the custody of his father, though his mother received visitation privileges.

I'm impressed by your site, the wonderful photographs and documents, and your thoroughly researched articles, providing information that could otherwise be lost, important not only to residents of Sandusky, but to everyone interested in people, places, and American history and culture. Thank you for finding me, so I could find you!

It's interesting to read about this early custody battle, occurring in the early 1900s, and Annette Fitch Brewer Nelson's life as a mother, a writer, and an activist.

Her full book is posted on Google books.
Link to Book on Google

joe jefferson club amy have also been named for a local man of the same name. There was a Joe Jefferson living in Sandusky at this time. For a time they dids meet in the Masonic hll on Wayne St.

She was actually married to Isaac Curtis Brewer IV. Her son was I C Brewer V.