On February 26, 1891, about one hundred residents of Sandusky and the surrounding area boarded a special B & O train for a trip to Georgia. The trip was sponsored by the Erie County Board of Agriculture and the Lake Erie Fruit and Wine Growers Association. Most of the men on the trip were farmers and fruit growers, but several Sandusky community leaders went as well, including Judge E. B. King, W. T. West, Judge Merrill, Jacob Kuebeler, U. T. Curran, J. G. Strobel, and Clark Center. The purpose of the trip was to examine southern vineyards, orchards, mills, and factories. The February 27, 1891 Sandusky Daily Register reported that Judge King, Judge Merrill, and City Clerk Miller had hayseed scattered on their hats, and Councilmen Bing and Nielsen carried corn cobs in their pockets. Several containers of “Hommel’s Extra Dry” wine bottles were on the train, reportedly to give the Georgia residents a sampling of Erie’s county’s liquid agricultural products. 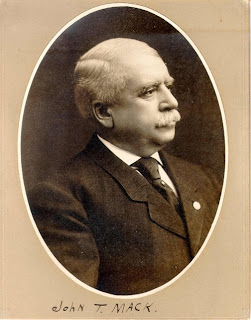 John T. Mack was the main organizer of the southern trip. (He did not go on the trip, however.) He coordinated the agenda with W. T. Glessner, a railroad executive from Americus, Georgia. Mr. Glessner, often called Major Glessner, had previously brought a group of farmers and newspaper men from Georgia to visit Northern Ohio’s many fruit farms, vineyards, and wine cellars. While here, the Georgia men visited the Confederate Cemetery at Johnson’s Island. As a result of the trip, it was arranged for slabs of Georgia marble to be placed at the gravesites of the Confederate soldiers interred at Johnson’s Island Cemetery. 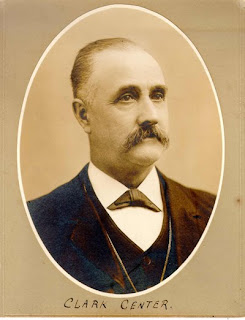 During the trip, J.F. Greene and Clark Center wrote articles for the Sandusky Daily Register, reporting of the experiences of the excursionists. Members of the group saw Kentucky bluegrass, southern mountain ranges, and the sites of Civil War battles. They visited cotton mills, and learned how soils and fertilizers differed from those in Ohio. Clark Center reported that Georgia peaches grew in “beautiful perfection.” At Americus, Georgia, all the men received badges that said “Welcome Citizens of Ohio to Americus, Georgia, March 5th, 1891.” The northern visitors were given a reception by the city’s businessmen in Columbus, Georgia.

After leaving Georgia, the Erie and Ottawa County visitors went to Jekyll Island and Cumberland Island. On the trip home, visits were made to Lookout Mountain and the National Cemetery in Chattanooga, Tennessee.

The Sandusky Daily Register gave reports on the Southern excursion from March 2 through March 18, 1891. Shortly after his return home, J.F. Greene gave a resume of his trip to the Perkins Methodist Church Ladies Home Group, followed by remarks by George Ransom, C. F. Steen, Charles L. House, and Will C. Dewitt.

Prior to the 1891 Georgia excursion, another group of Sandusky residents visited Georgia. In this undated photograph, W.T. West (number 1), W .V. Latham (number 2), and George Barney (number 3) are pictured in a group photo in Albany, Georgia. 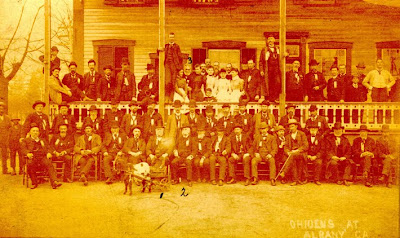 Congratulations on being voted one of Family Tree Magazine's 40 Best Genealogy Blogs!