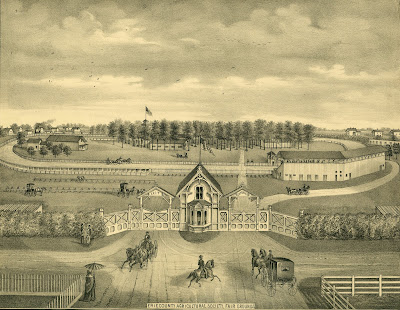 According to the Premium List for the Fair, the twenty-first annual fair of the Erie County Agricultural Society was held in Erie County at the Fairgrounds from September 23 to September 26, 1879. 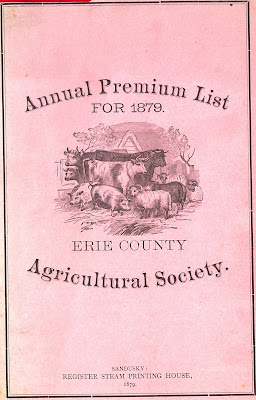 Entries in the Annual Premium List provided the amount of cash awards to be given to residents of Erie, Sandusky, Ottawa and Huron Counties who competed at the Fair in a wide variety of categories, including livestock, farm implements, manufacturers’ products, fruits, vegetables, handmade clothing, quilting, embroidery, photography, and flower arranging. In the Educational Department, students and teachers were awarded diplomas for excelling in such fields as spelling, reading, attendance, and record keeping. Scattered throughout the Premium List are advertisements from local companies. 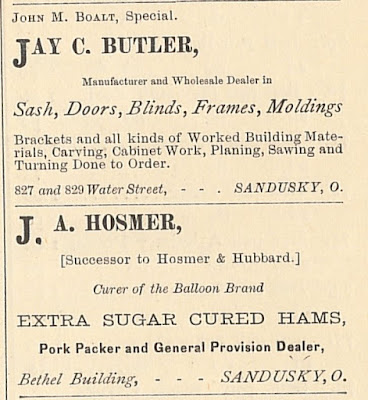 The Adams’ Buckeye Land Roller was manufactured by the Sandusky Tool Company at the time of the 1879 Fair. This particular piece of equipment was known for its durability, though simple in design. 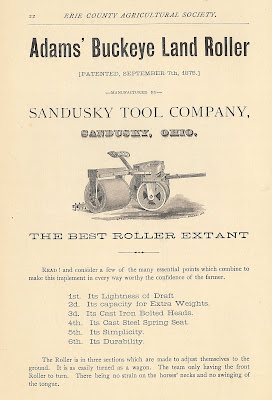 The Sandusky Register provided excellent coverage of the activities at the Fair. A large article on page 4 of the September 26, 1879 paper reported on the events of September 25, when it was estimated that fifteen thousand people attended the Fair. 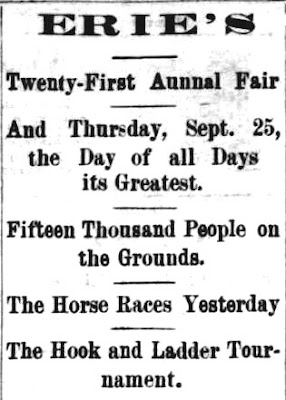 On Thursday, there were horse races held at the Fairgrounds, as well as several teams that competed in a Hook and Ladder Tournament. John Krupp, who exhibited several pieces of furniture, also had on display a burglar-proof air-tight grave vault which was designed for protection against grave robbers. 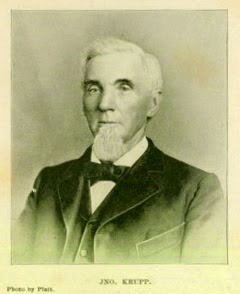 At the fair, William Dilger had a display of plants that included an orange tree, a rare philodendron and a bridal bouquet of rare beauty. Photographer A.C. Platt featured a life size crayon portrait of President Hayes and Dr. I.B. Massey in his exhibit. D.C. Richmond stated that at the 1879 fair was the largest and best display of apples he had ever seen at any fair. Henry Lange, a grape grower from Kelleys Island, showed fair visitors a five foot stem of Concord grapes which contained over sixty bunches of grapes. During the wheat binding competition, local businessman J.A. Hosmer attempted to place a live pig inside a hot air balloon. It turned out that the young pig became too restless, so it was removed from the balloon. It was decided instead to place business cards from area merchants, as well as a copy of the Sandusky Register and a publication from the Erie County Agricultural Society inside the hot air balloon. Fair crowds grew excited as the hot air balloon headed to the north, toward the Marblehead peninsula. To read much more about the exciting 1879 Fair, visit the Sandusky Library Archives Research Center where you will find decades of local newspapers on microfilm, dating back to 1822.
Posted by Sandusky Library Archives Research Center at 9:00 AM