Reunions, whether informal or carefully planned, allow people to reconnect with family and friends from their past. Families, schools, colleges, military units, clubs and many other organizations hold reunions, some on an annual basis, and others not so frequently. In the first half of the twentieth century Sandusky’s local newspapers featured articles about family reunions, often in the neighborhood columns. Below is a photograph of a gathering of the Sprau family in 1916. 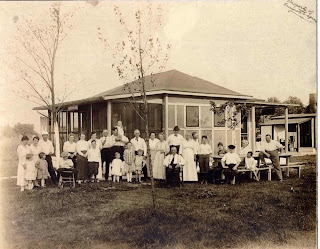 An article appearing in the June 18, 1921 issue of the Sandusky Star Journal reported on the sixth annual reunion of the Moyer family, held at York Center in Sandusky County. During the business meeting W. H. Moyer was elected president and Elmer Moyer was elected treasurer. The day’s events opened with the hymn “Blest be the tie that binds.” Rye Beach was chosen as the location for the seventh annual Moyer reunion. Cedar Point continues to be a popular site for family reunions, as it has been for several decades.

When the G.A.R. held annual meetings, they were called encampments. War stories and songs were shared at these well attended events. Individual military units held reunions of the surviving members of their group. The 30th Annual Reunion of the 101st Ohio Volunteer Infantry was held in Sandusky on August 27 and 18, 1896.

The August 7, 1912 issue of the Sandusky Register announced that veterans from the 128th Ohio Volunteer Infantry would meet at the West House for their thirty seventh annual reunion. Henry C. Strong was the president of the group of veterans of the 128th Infantry.

Descendants of pioneer preacher Rev. William Gurley were guests of honor at a Methodist centennial celebration held in Milan in April of 1912.

A Centennial Reunion of graduates of Sandusky High School was held in 1955. 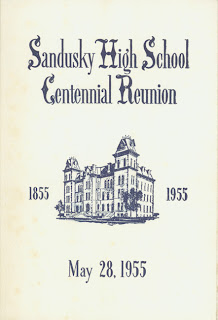 Pictured below are Sandusky High School alumni and former faculty at a reunion held at the Rockwell Springs Trout Club in Castalia, 1950. 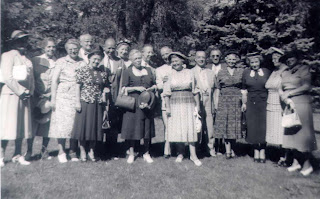 Do you know the name of the man on the 101st OVI reunion ribbon?

I have four "Good" ancestors that were in the 101st OVI and am trying to find what reunions they attended.
Daniel Good
William Good
Jacob Good and David Good

William Good is buried at the OSSH in Sandusky.

The man on the ribbon is Dr. Thomas M. Cook, Regimental and Brigade Surgeon for the 101st. The same image is in the "Story of the One Hundred and First Ohio Infantry: A Memorial Volume" (p. 23), which is available on Google Books: http://tinyurl.com/yeq4otl. Unfortunately, we do not have any information about specific reunions of the 101st.