The Vanished Settlement of "Africa" in Erie County

The July 1878 issue of the Firelands Pioneer features an article written by A. W. Hendry about a vanished settlement of African Americans in Erie County in the 1830’s and 1840’s. 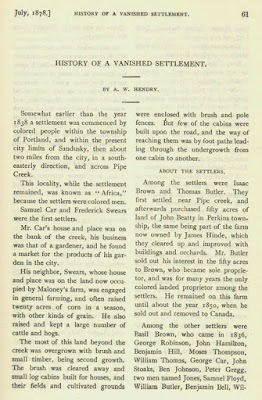 The settlers resided in an area southeast of the city of Sandusky, across Pipe Creek. The area was known as “Africa,” because the residents were men of color. Samuel Carr and Frederick Swears were the first settlers, arriving in Erie County in the mid 1830’s. Samuel Carr lived on the bank of Pipe Creek. He sold produce from his garden in Sandusky. Mr. Swears had a grain farm and also raised cattle and hogs. 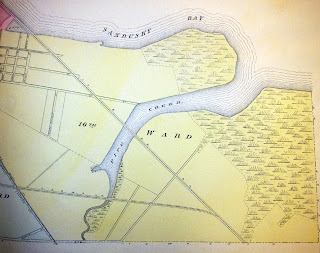 Mr. Hendry wrote that the land beyond the creek was overgrown, so the settlers cleared away the brush and timber, and built log cabins and cultivated the land for crops. Isaac Brown and Thomas Butler first settled in Pipe Creek, but later purchased fifty acres of land from John Beatty in Perkins Township. (This land was later owned by James Hinde.)


Other settlers in the Pipe Creek area were Basil Brown, George Robinson, John Hamilton, Benjamin Hill, Moses Thompson, William Thomas, George Carr, John Stoaks, Ben Johnson, Peter Gregg, two men with the last name of Jones, Samuel Floyd, William Butler, Benjamin Bell, William Harris, James Jackson, Dick Lett, and a Mr. Glinton. Rev. Thomas H. Boston settled in Erie County in 1839. In about 1843, there were over one hundred African Americans residing in the settlement. The residents built a log school house, which was sometimes used as a church. A Mr. Robinson from Rhode Island was a school teacher there. General John Beatty, in an address to the Firelands Historical Society on October 3, 1900, stated that he once attended a revival meeting at the home of “old Sammy Carr.” He said that “It was the most animated religious gathering I ever witnessed.” General Beatty also mentions a debate between the white young men of Milan Road and the African American young men of the Huron Road (now Cleveland Road.) A Mr. Brown took the floor and he “was not only a master of good English, but had a touch of humor in him, and a whole arsenal of sarcasm and invective.” Mr. Brown won the debate, and General Beatty’s team lost.

Following some unpleasant land disputes, most of the residents from this early settlement moved to Canada. However, the families of Rev. Boston and Basil Brown remained in Erie County. Visit the Sandusky Library to read about the vanished settlement of Africa, and hundreds of other accounts of the pioneer settlers of Erie and Huron County in the Firelands Pioneer, a multi-volume set of journals shelved in the genealogical section of the library’s Reference Services area.

Posted by Sandusky Library Archives Research Center at 9:52 AM

I love this blog of Sandusky History it's wonderful, but there should be an article about the African American doctor (Dr. Hunter) graduated from OSU. I wish I could remember his first name. I've been trying to find out more about him. If I can find someone who remembers him, I will write again. Thank you again...very much. Mrs. Cook PHS 1966

I believe Dr. Hunter's first name was Willard or Wadell. He was the only African Am. doctor back in the 40's and 50's. Please find some history on him. Thank you.

FYI...I do not know Dr. Hunter's first name, but he was my father's doctor for many years. He visited our home many times. His son's name was Jackie and Jackie married Lavina Rice (a 1949 graduate of Sandusky High School). Last year I was told that Jackie was living in Toledo, Oh.